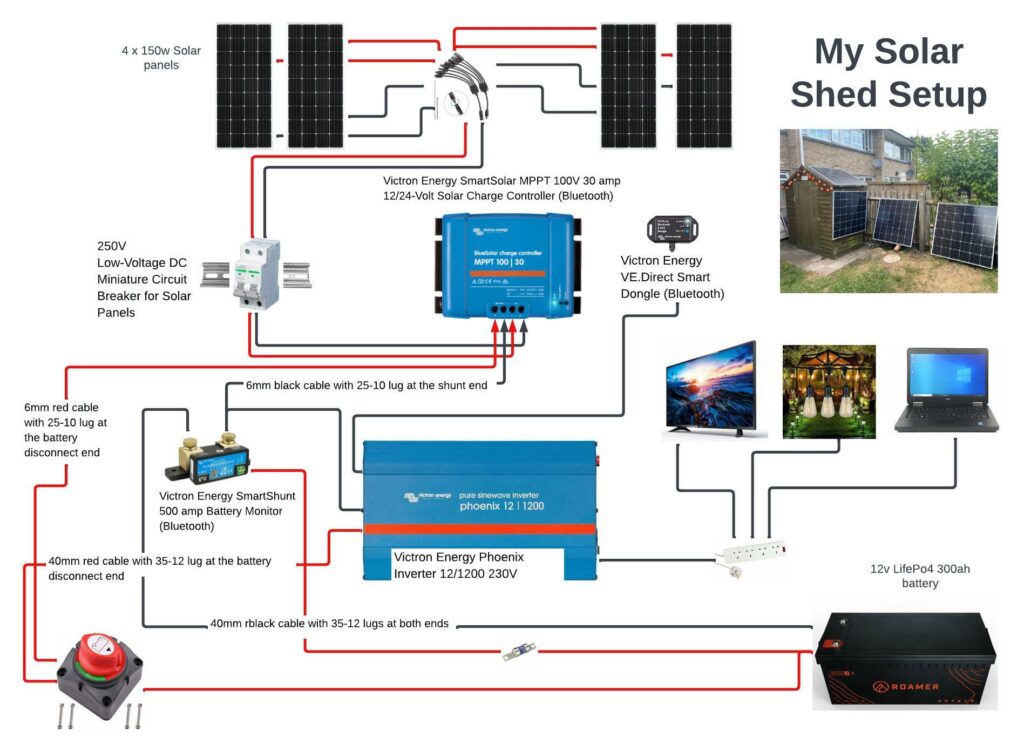 This is how I built a 12V off-grid solar power system in my back garden and what I have learned through the process.

It all started with a 300w auto inverter I had laying around, 2 x 6V batteries (joined in series) from my daughter’s electric car and a 250W garden light I wanted to be able to power using the power of the sun. How expensive could it be? To find out continue reading and hopefully, you will be able to avoid some of the mistakes I’ve done.

I started my planning by watching videos on YouTube about off-grid solar systems and the more videos I watched the more confusing it all become.

In the end, after a month of research, I decided that I don’t want to invest lots of money into this and since I have most of the items, I will spend £55 for a 30w solar panel and a 10amp PWM solar controller.

Then, I invested in a basic multimeter to help me troubleshoot further similar situations. My multimeter confirmed that my batteries were dead hence the reason why my controller wouldn’t start.

Next, I bought two second-hand car batteries from the Facebook market for £40 hoping that at least one was decent.

Wired one of the batteries to the PWM solar controller and finally, it came to life. Fixed the solar panel on the roof of my shed and run the wires inside. Finally, I connected the inverter and tested the 250W garden light. The light turned on for a few seconds then went off and the inverter started beeping.

After some reading, I understood that the car batteries I got (flood acid car batteries) are designed to deliver a lot of power for a short amount of time, then the car inverter would quickly top up the battery in transit to have it ready again when needed.

Side note: That’s why your battery will run flat if you forget the lights on or listen to music when the engine is not running.

To address this issue, I thought that if I buy a smaller light the issue will be solved. So I spent another £27 for a 20w garden light and some wire and a UK plug and learned how to wire all together hoping that this will be the end of it. Well, it wasn’t!

Needless to say that it worked a bit better, but again after a few minutes, the inverter would start beeping again and had to shut everything down.

I then decided to connect the second battery in parallel to keep the Voltage at 12V, but double the Amps. In order to do that I needed cables and adapters which are not cheap.

However, I managed to connect everything together, let the batteries charge for a few days and everything kind of worked until the sun stopped shining and my batteries wouldn’t charge enough.

To address this issue I thought I need bigger solar panels and a better MPPT inverter because apparently, the PWM is not very efficient.

I started with a 150w solar panel from Dokio which perfectly fit on top of my shed. I took this as a sign to move forward with this project so I decided to replace my PWM solar inverter with the best one out there (the most expensive) – Smart Solar controller MPPT 100 | 30 Bluetooth from Victron. Coincidently the sun was shining a bit more than usual so my system started to deliver more stable results.

After months of reading the stats on my Victron app, I realised that the 150W solar panel usually delivers half the watts partly because of its installation and the sun’s elevation in the sky – the rays wouldn’t hit my panel at 90 degrees for the best outcome.

The next logical step was to add a second panel in parallel to help collect as much sun as possible and charge the batteries as quickly as possible.

At this point, I spent around £600 and am still not able to keep my 20w light on all the time without triggering the inverter’s alarm.

I thought now that the inverter is not efficient so I bought the best of the best, a Phoenix 12 | 1200 pure sine inverter from Victron and replaced the 20w light with a string of 5w LED bulbs.

Now the inverter was too powerful and sucking all the power from the batteries and shutting down my lights in the middle of the night. At least the inverter warning message was only showing when connected to the app and just shut down the inverter if the battery level went below a specified amount.

After careful consideration, I decided to invest in a proper LiFePo4 battery, a 300Ah from Roamer which was on offer for only £1305.

After 2 and a half months of waiting the battery arrived.

In the meantime, I start dreaming hoping that with the new battery and inverter I would be able to cook at least breakfast on my new off-grid solar system so I start looking for mini ovens and appliances, not more than 1200w, the maximum my inverter can handle. At least this is what I thought!

After a long waiting period, my battery arrived. It was 33% full and I was supposed to charge it first before adding it to the system. Of course, I was too excited and started wiring everything together.

My battery was at 53% full and my daughter wanted pancakes for breakfast. I had to test my newly purchased 1200w Cusimax induction hot plate and Netta 1200w mini oven. I unplugged all other consumables (garden lights, TV, battery charger) and connected the induction plate. Turn it on to the minimum setting and watched the meter going up on my inverter app. The fans turned on and the high voltage alarm appeared and my inverter shut down. After a few seconds kicked in again by itself. Initially, it was drawing about 1600w hence the reason why my inverter shut down, but as soon as the coil heated up the power required came down and even when turned up to max power was only drawing 1230VA from the inverter. I managed to finish cooking the pancakes, but the inverter was not happy. the same happened when I connected my mini oven.

I opened the inverter’s manual and found out that technically it could only handle 1200w for a short period of time which was the exact behaviour I was experiencing. I also found out that the cables from the battery to the inverter should be thicker at least 40mm (mine was 24mm), and even the cable from the solar panels to the controller and from the controller to the battery should be 6mm to be able to safely carry 30amps (mine was 4mm).

I also ordered two more solar panels, a battery disconnect switch, and the correct size cables and went to TLC Electrical Supplies store in Basildon to buy the lugs required.

Initially, I thought that 25mm, 10 thread lugs would suffice. In the end, I bought 35-12 and 25-10 lugs and I am so glad I did that. Once I removed the insulation from the thick 40mm cable the 35-12 would fit like a glove so I used those for all the M10 threads, 6 in total. I used 2 x 25-10 lugs for the 6mm cables from the solar charge controller to the Shunt and the battery respectively.

I have been monitoring my system for a few days now and everything is connected and working as expected. The battery has reached a 100% charged level. The maximum power I was able to generate was 1.5kWh in a day.

What I have learned?

Total cost so far £2871 out of which £2703 actual cost deducting the cost of the items no longer in use.

Power outage in my area

014-2020 – The Walkie Talkie Building under the moonlight