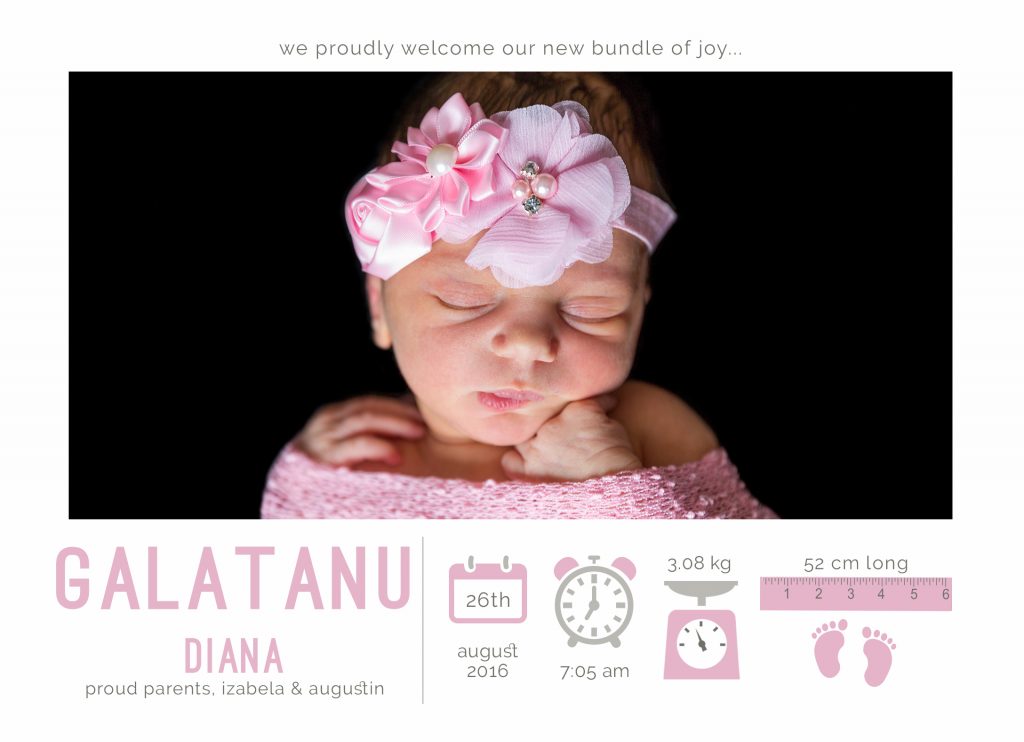 Natural birth is a wonderful thing if you are men…or women with a high threshold to pain. My wife, Izabela, thought she is tough, however, it took her 2 days to give birth naturally to our daughter Diana. Each woman is different which means each birth process will be different but if you want to find out how it all happened … continue reading and watch the giving birth video at the end of this post.

7:40 – the water broke – Iza called Queen’s Hospital, Romford and went for a checkup.

8:15 – we arrived at the hospital; we got confirmation that water has broken; nurses in the triage were great; they and run all the necessary routine checks and advised us to go home.

16:30 – water broke again; it happened that we were inside the Range store.

17:30 – we went for the second check up and, again, we were advised to go home and count the contractions and call the hospital when contractions are 1 min long every 3 minutes before calling the doctor or contact the doctor after 24 hours after the water has broke – the next morning at 6 am basically.

6 am – Iza had to call the hospital to confirm induction because she had no contractions overnight.

7 am – we arrived at the hospital and kept under supervision.

14:45 – the midwife checked again for dilatation – less than 1 cm; Iza had two options: option 1 – drip (for speeding up contractions) or option 2 – dissolvable tablet into the vagina – Prostin E2 (for contractions and dilatation); we decided to go with Prostin E2.

16:15 – the midwife suggested to go for a 2 hours walk; we decided to go home and have dinner instead.

18:00 – we have returned to the hospital; the midwife reassured us that everything is normal. The real contraction just began. Before, what we believed to be labour, wes, in fact, Braxton-Hicks contractions.

22:00 – Shift change at the hospital, another midwife took over. She runs another set of tests and confirmed that everything is normal. The pain was building up. She was given some codeine tablets for the pain, which didn’t help.

23:00 – Iza got moved to the labour ward; another midwife took over and after checking Iza told us that she might not even be in labour, saying “You are in labour when your cervix is dilated to 4cm”.

00:00 – the midwife checked and found only 2 cm dilatation; Iza is breathing gas and air through a mouthpiece like there was no tomorrow. That was making her dizzy and according to her, that did not really help but kept her busy.

00:20 – Pethidine injection in the leg – a pain reliever. They said that the effect won’t be noticeable for 20 min. In Iza’s case, it had no effect.

1:30 – the anesthetist performed the epidural injection in her spine, to numb the middle section of her body so she won’t feel the pain (as much). She was still able to feel the contractions but with less pain.

2:00 – a catheter was inserted to help her pee without having to go to the toilet; they dimmed the lights and we both went to sleep.

4:10 – the midwife checked and confirmed 6 cm dilatation; the Epidural’ effect started to wear off, and the pain was coming back during the contractions.

The actual moment Diana was born was also filmed, so if you are not too skirmish, check out this giving birth video.